In the last three years, we have experienced both a global pandemic, and a trade war between the US and China, two of the world’s superpowers. We are now in the midst of a war in Europe, we’re facing the highest inflation rates in four decades, all while the Fed and other Central Banks are eagerly waiting to raise interest rates to try and restore some equilibrium in the money/credit market. Who could have predicted an outbreak of war just as it seems that the world was beginning to open up again? But that is risk, and risk is a focal part of finance, investing and life. Despite headwinds we inevitably encounter, humans and their innovations and resilience ensure we survive, advance, and grow.

Inflation is a buzz word that has come to the forefront of economic discussion over the past twelve months and it’s currently very real. The latest data shows that US inflation is up around 8% year on year (an average rate), but some sectors like energy, 26%, and used cars, 42%, are experiencing drastic price increases, which are hurting everyday consumers. For Millennials, this is their first real experience of rapidly increasing inflation. How do we prepare for inflation while trying to maintain the same standard of living?  While inflation and economic uncertainty causes volatility in markets as we are witnessing today, most asset classes tend to do ok even in higher inflationary times. See the graph of real returns below from 1970 – 2017, with the higher inflation years defined as over 3.26%, the median CPI inflation rate for the same period.

Certain assets classes such as commodities and property are traditionally known to perform better during periods of higher inflation - but equities still do ok. Fixed income suffers during increasing inflation, but a portfolio can still have downside risk protection without fixed income or a large weight of fixed income. By having a diverse portfolio along with a long term plan means you can still earn a rate of return that beats inflation, helping preserve your standard of living.

Last month The Federal Reserve, raised interest rates for the first time since 2018. Given the rapid pace of inflation, the Federal Reserve are considering implementing larger rate increases multiple times this year. Raising rates is a contractionary economic policy, that makes money more expensive, which results in less business investment and usually less consumer spending. Since the end of the Great Recession, in June 2009, the Fed has increased its asset holdings from just over $2 trillion to nearly $9 trillion, essentially creating $7 trillion in new money. This represents a 350% increase in money supply, from the Federal Reserve alone, as presented in the graph below. 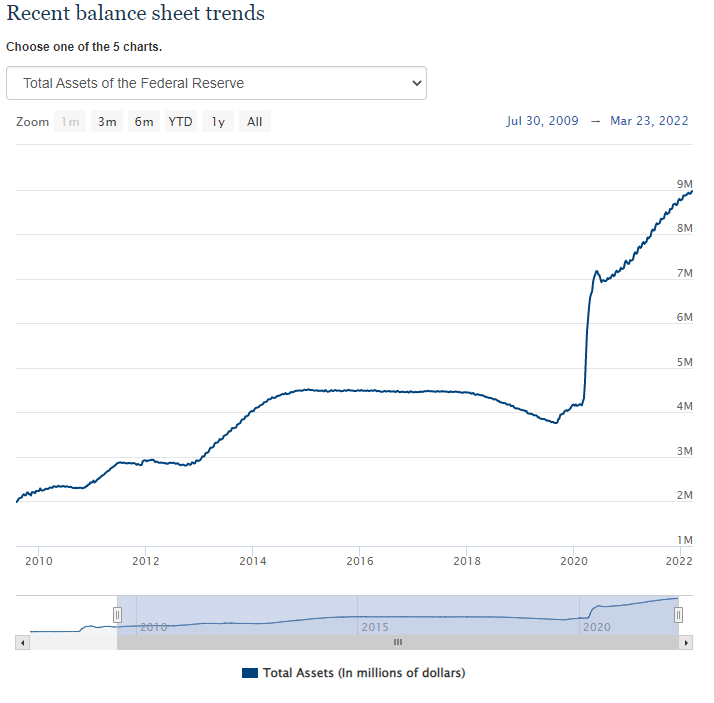 So how will the economy fair with vastly reduced quantitative support, while navigating spiraling inflation? Combining the increasing cost of money while reducing overall money supply from record highs will create strong headwinds, and risk, but if we manage the risks and position correctly, one can still have a successful financial life.

Should investors try and time these economic and fiscal changes by selling or reducing exposure? No. We understand that economic changes and fluctuations are a type of macroeconomic risks, and we factor them into our thinking. Many people have touted the chances of a recession. The fact is we do not really know until hindsight. The main data or recession indicators, are lagging indicators, meaning we are not aware of these until after the fact. So, in fact perfectly timing a recession is extremely difficult. For example, the economic definition of a recession is two consecutive quarters of declining GDP growth, and changes in GDP are only known after a quarter has passed. Will we have a recession in the next 1-2 years? I think it that may be likely, but many have also predicted recessions, after Brexit, after the Trade War and after COVID, but markets have proved to be extremely resilient and are focusing on positive economic data. Therefore, we should take confidence in the fact that markets and economies work in cycles, and these cycles tend to repeat themselves over the long term. Economies, markets, and jobs recover from recessions, and since June 2009, the S&P 500 has returned 584%, with an annualized real return (after inflation) of 13.38%.

Timing the market, is extremely difficult. Dimensional, one of our investing partners, have a great image (below), on the disastrous effects of trying to time the market on an investors total return. If you missed the best five days between 1990 and 2020, your return would be 36% lower than if you had of stayed invested. A total reduction of 36% for only five days, over a very long time horizon of 30 years, is drastic. 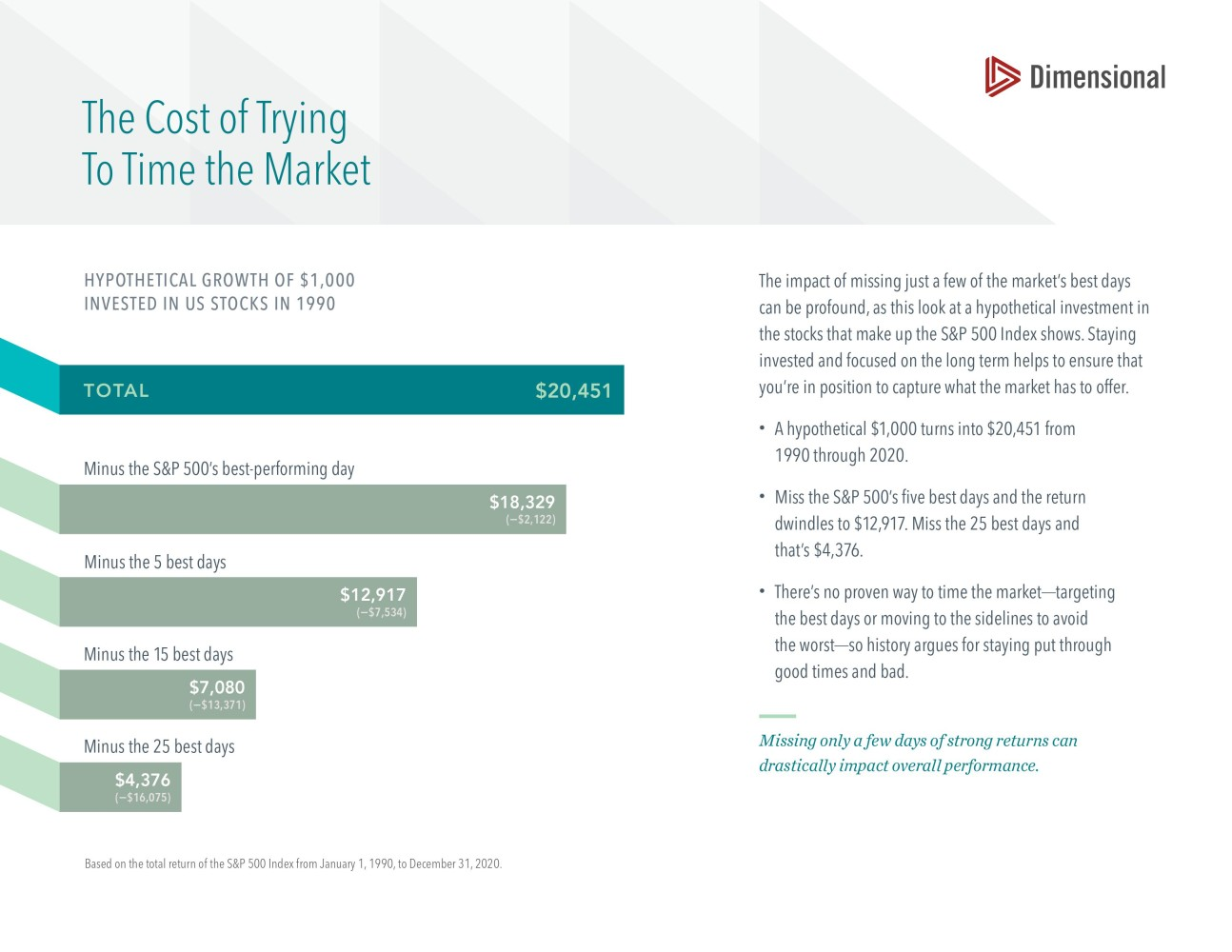 Even if people have a great understanding of markets, it’s extremely difficult to time the market, as evidenced earlier. Vladimir Lenin, the Russian revolutionary and first head of the Soviet Union, has a famous quote, ‘There are decades where nothing happens, and there are weeks that decades happen’. If you miss these transformational events, you can suffer greatly from a return point of view. Examining Dimensional’s findings, we should understand that there will be highs and lows, but in the long term, by staying resilient and patient you can earn strong and consistent positive returns.

The war in Ukraine is gripping resources, and interest from all powers around the world. The war is an example of another major event that carries economic uncertainty and risk. At present, the West have refrained from engaging in military combat, but have opted to retaliate through financial and economic means.  The major economies have enforced trade and financial sanctions on Russia, which are causing drastic effects. Some of these effects are creating more supply pressures that in turn will probably lead to higher prices adding fuel to the inflation fire. War is awful and in economic terms, it causes negative net effects, as capital and resources are directed towards less productive economic means. What will be the result of the war? Coupled with COVID and supply chain issues, I believe it’s likely that supply chains will return to domestic shores and become more insular. This could mean the recreation of manufacturing jobs in domestic economies which could in turn result in a reversion from lower cost production to higher cost domestic manufacturing. But markets, countries and companies will adapt, and we will return to positive trends after learning, adjusting, and innovating our way around the noise.

To conclude, people will say ‘timing’ is everything and they are right. However, executing perfect timing is extremely difficult. Hindsight is great, but the fact is there are very few experienced investors that can time a market that has millions of daily participants. Not making bad timing decisions, i.e. not selling at a low price, or missing strong positive days, are often as important as making a good timely entry. People frequently reference the Great Recession, and more recently COVID, for the recent two stark dips in the market. These negative economic events actually create very attractive buying opportunities for investors, to add to their long-term investment strategies. Just look at the history, no matter what life throws at us, we will survive, adapt, and grow.